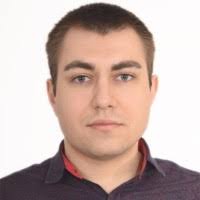 Since images are also signals, Alexandru also got interested in digital image processing and found out that image data is very suited to be used in artificial intelligence algorithms. Thus, he decided to do a master in computer vision and biometrics at University of Twente where he was introduced both to the classical computer vision and to the field of artificial intelligence. During his master he did an internship at Sony Electronics in Germany where he used artificial intelligence to classify radar targets and for the last part of his master studies Alexandru did his thesis at UMC Utrecht in the Computational Imaging Group coordinated by Matteo Maspero. The theme of the thesis was to design an algorithm that uses deep learning to speed up the iterative reconstruction and improve the quality the CT images.

Alexandru is now working as radar software developer at Bosch in Budapest.

Social media and other resources
LinkedIn